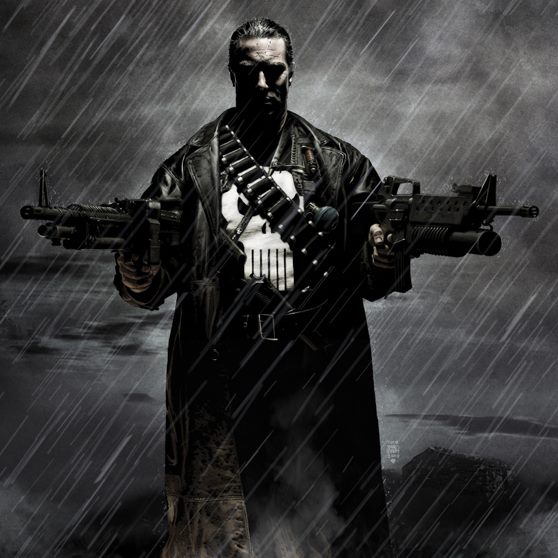 We will meet at the Clubhouse on Fairview and ride from there.  If you are in a cage, just drive on by.  I have already laid down bets on who won't show.  Hope I am wrong and I lose my money.
Posted by GRIM at 9:08 AM 5 comments: 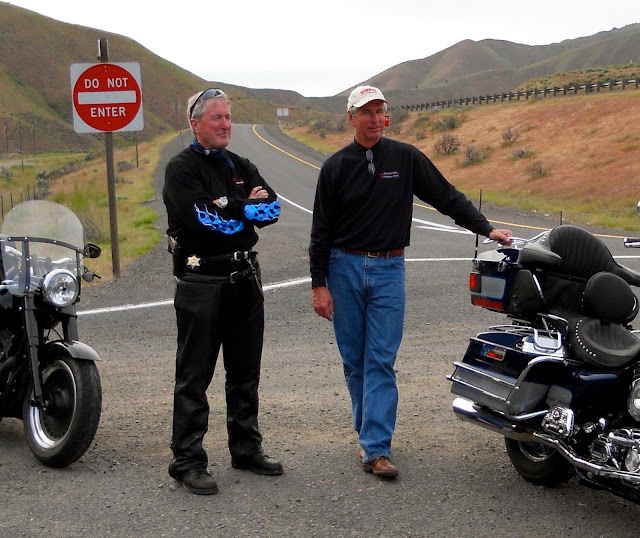 The OGRES Annual Iron Butt did take place over the last weekend.  It was scheduled to begin at 8:00 AM
last Friday the 19th, but both final hardcore riding participants (G-Man and Big Easy) had some last minute
business that got in the way, and so the scheduled leave time changed from 8:00 to 11:00, then to 1:30
and finally “kickstands up” at 3:10, from the Eagle Chevron at State Street.  Riders rode non-stop to LaGrande where G-Man ran out of gas and just coasted into the Shell station at the first off-ramp down the hill.  Big Easy still thinks G-Mans tank is the same as his tank….NOT. 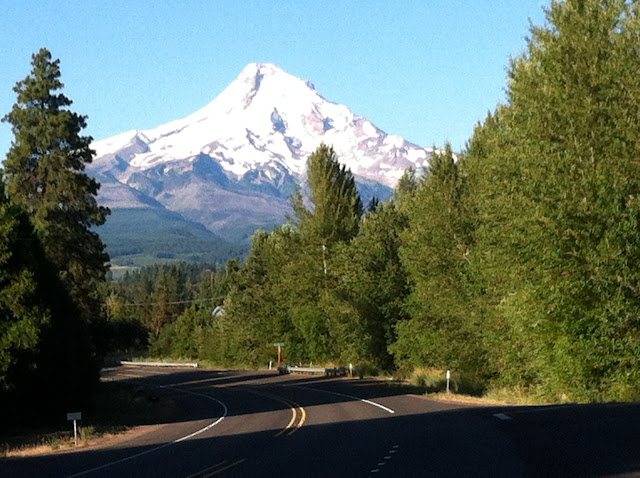 Then on to Arlington for gas up again, speeding most of the way.  At the first bridge over the Columbia, riders rode up to Goldendale, Washington, with spectacular rural scenery, then thru beautiful winding farm country, with Mt. St. Helens in the background, before starting a long wind down thru some spectacular canyon country and the “hippie style” community of Klickitat, Washington.  (Steve Nielson, the Great Ride Planner, was right, this is a ride worth taking)  We dropped out near White Salmon as the light faded and we ate real good Chinese food at a gas station run or owned by recent emigrants from China, before camping on the ground in a very nice clean KOA style camp ground across the river from Hood River.

Up at 5:30, good hot shower, across the Toll Bridge ( .75 per rider ) and a 1 course breakfast at McD’s.  Then, on south thru the most spectacular early morning scenery of orchards, farms, rolling hills, beautiful forests, and the majesty of Mt. Hood in the background.  Then on to Barlow Pass with temps of near 40 degrees.  Then we took a little known side road that was very windy for 30 miles or so, ending on a highway at Detroit, Oregon.  I got a pastry and Big Easy used the facilities, and we took off for Belknap hot springs.  About 12 miles down the road was a sign posted that said “62 miles till next gas”.  At that point, Big Easy was in the lead, did not see the sign, and was headed south.  I waited 5 minutes, hoping he would know that I was not behind him, but then decided to return to gas up knowing I would not make it without doing so.  I retraced about 12 miles back, gassed up, and headed back down the road.  I had given my cell phone to Big Easy earlier in the day so he could charge it on his bike and knew if we lost contact, we would be lost for the day.  Luckily, he finally look in his rear view mirror at some point, turned around and rode back to find me.  Even though I had filled my tank, he was sure he could ride on without gas.  Gutsy Big Easy.  So, on south we rode, and made it to some beautiful falls at a way point along the way, and then finally Belknap Hot Springs.  We found the gardens and location beautiful and worthy of an Ogres Ride in the future. 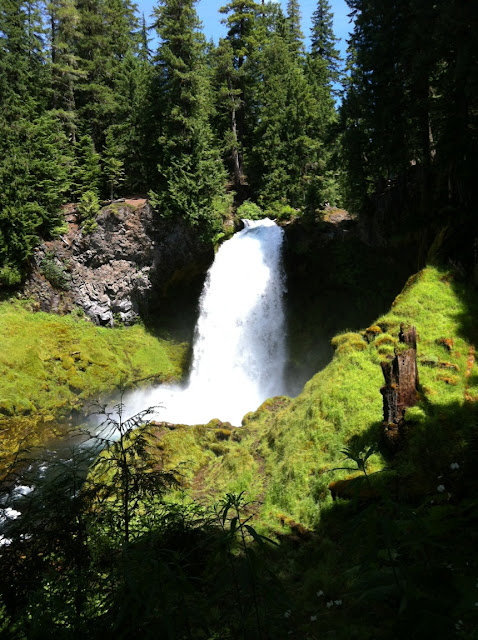 Next it was over the McKenzie pass and a stop at the lava fields and the awesome “fort” type rest stop at the top.  I shared my memory of the ride most of the OGRES took years ago when I first rode into Oregon with the gang that eventually became the OGRES.  Fun times.

Finally, it was getting late in the day, on thru Sisters, Redmond, Prineville, and a stop in John Day for something cold to drink, and we did learn that the favorite burger in town is STILL the Fergus McLeash burger.  And not so much a favorite is the Shrimp Melt….. 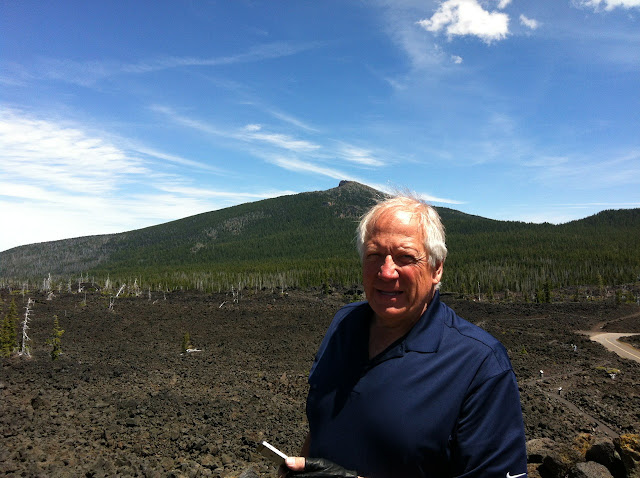 Then, it was a screaming ride on to Vale, across the Snake at Ontario, and back on our beloved Freeway where  you can ride 85 MPH and most of the time get away with it.  We waved good bye at 10:15 on State Street, pretty sweaty and bug spattered, and exhausted, having traveled about 995 miles in about 31 hours.  It was a great ride.


Oh well for him that finds a friend,
Or makes a friend where'er he come,
And loves the world from end to end,
And wanders on from home to home !


Most of us met at the Gowen Road Chevron at the appointed time.  We all got back together at Pickle's Place in Arco.  Present: Scarecrow, Duke, Big Easy, Grim, Bomber and Rip City.  Not present: Krome, Smooth and Zeus.  We had half as many guests as we did members.  Oh well.

The ride to Picabo was fairly uneventful and we stopped for gas there.  We rode on to Arco and had a lovely lunch at Pickle's Place.  One local had taken the big circular table to himself for a cup of coffee and gave me that "I dare you" look when I stared him down.  He didn't budge so we sat at a smaller table.  Rip City had a cotton candy shake up front to ruin his appetite but it didn't work.  Bomber was served last again.

Scarecrow was presented with lovely custom jacket with a very expensive price tag.  What a lucky guy to have such generous and thoughtful friends.


We then headed to Mackay and beyond.  It was smooth sailing until we started passing the mountains in the area of Mount Borah.  We passed through a hail and sleet storm that was the worst I had ever ridden in.  After getting clear of the sleet and hail storm, we found a break in the storm and only four riders remained.  We reached up and checked our ears and faces to make sure we weren't bleeding.  Everyone's appendages seemed intact and we waited.  This quartet was soon joined by two more riders and then the final three.  The final three had stopped to don their rain gear.  I don't have any rain gear, and never will, but that's another story.  I wonder if Damien Blade has rain gear.

We then rode through a mild rainstorm, compared to the previous onslaught, and then rode into the Hot Springs.  We parked and met Sergeant Mike and Shana.  We all got checked in and hit the pool.  Dinner was served and was excellent as usual.  Tri Tip steak and other lovely food disappeared quickly along with the dessert.  And then back into the pool.

In the pool, a game a "Catch This Big Rock" ensued and was enjoyed by some and not so much by others.  True personalities shine through when this type of game is played.  After the swim, we adjourned to the Octagon where some of the group listened to classic vinyl way too late into the night.


Morning rose with some taking a dip before a lavish breakfast that sent us on our way.  It was a great ride down to Stanley where we stopped for a break.  We then headed over the Banner Summit and down to Lowman and that leg was also a great time.  Unfortunately, just before Lowman we happened to end up behind some idiots in cages that made the leg from Lowman to Garden Valley much less than enjoyable.  I think next year, we go through Idaho City instead and eat at Trudy's.

After a much better lunch, than last year, we rode down to Boise ending our ride at the Beacon Light Chevron.  All in all, it was a great adventure and Challis Hot Springs continued to be a great overnight destination.

Next meeting is July 2nd at the Clubhouse on Fairview.  Be there or be square. 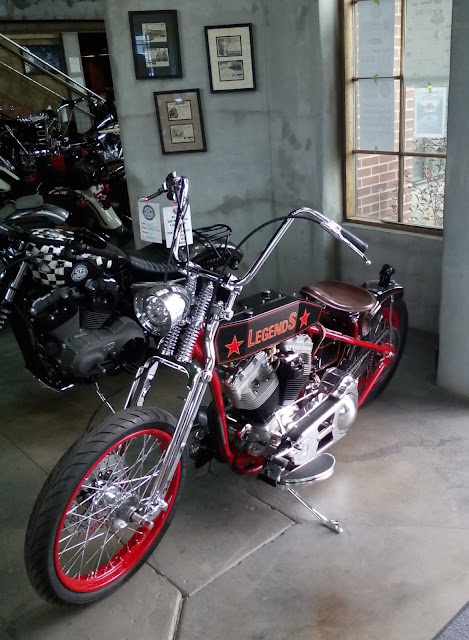 While in SLC over the weekend we went to Legends bike shop in Springville.  It would be worth a ride down there just to see their shop and collection of bikes.

I thought this was a great bike.  Everything new and fabricated in their shop.  I especially love the new old square tank.  $27,500. 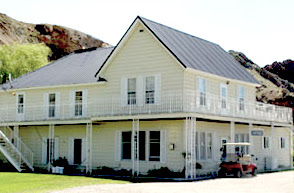 I just realized that the start time previous published was incorrect.  We always start this ride at 0900 hrs. or 9 a.m.  My bad.

The safety briefing will begin, this coming Friday, at 8:45 a.m.  We will be rolling by 9 a.m.  Please advise your guests of the time change.