Indian with a Bucket 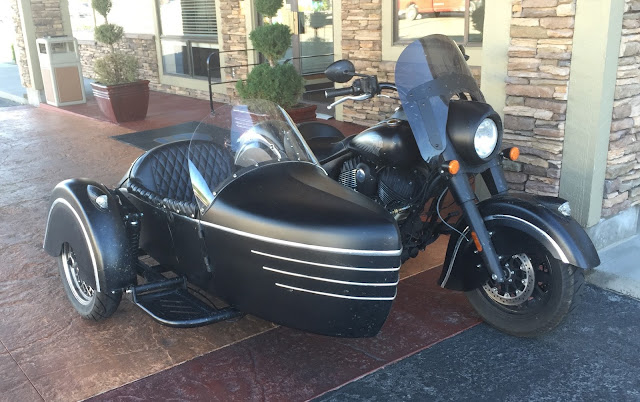 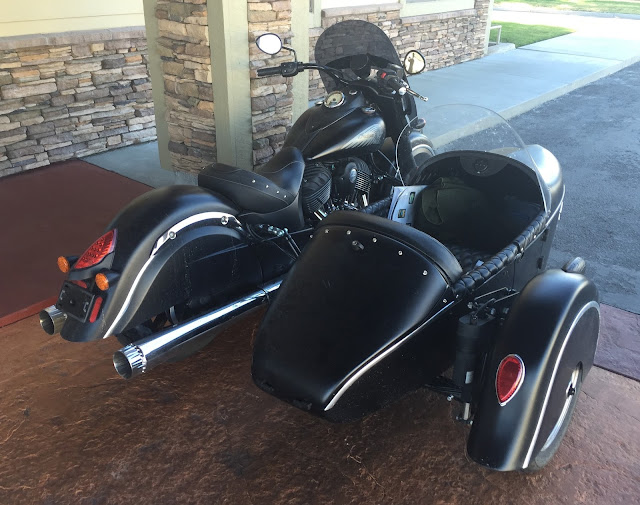 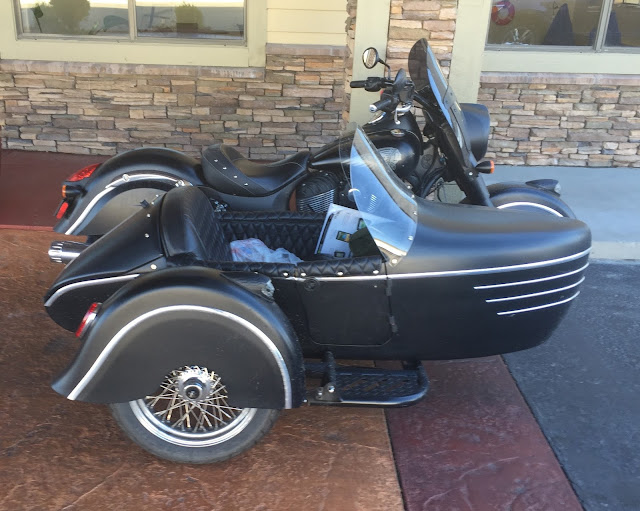 You don't see many Indians, compared to Harley-Davidson motorcycles, but this one is even more unique.  I spotted it at the Best Western in Ontario, Oregon.  It's a custom and is pretty cool.
Posted by GRIM at 3:05 PM No comments: 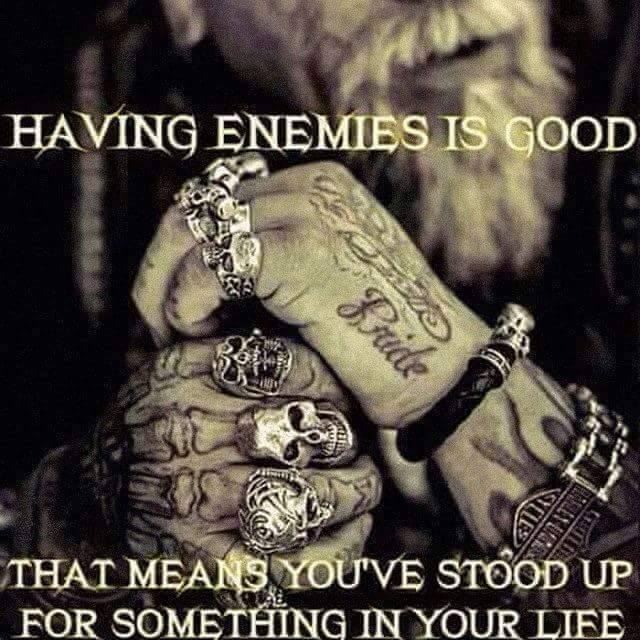 Meditation on Most Popular Motorcycle Roads 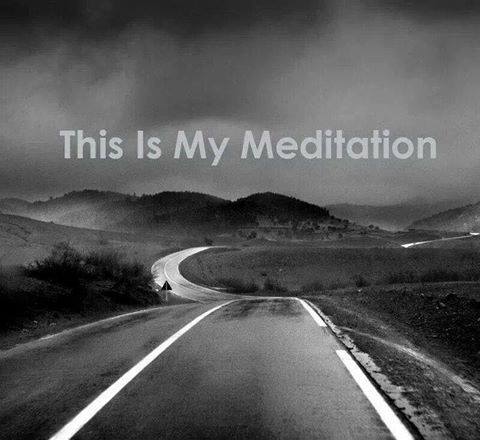 Check them out at this link: 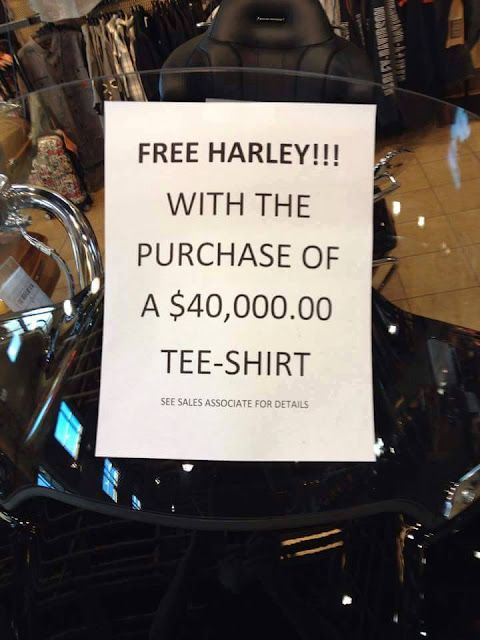 All members and guests met at the appointed place and time for a safety briefing and pre-ride antics.  It was there we found we had a celebrity with us.  He was wearing one white glove and that is all I can divulge.  Members present: Duke, G-Man, Smooth, Rip "Thriller" City, Grim , Big Easy, Bomber and Krome.  Guests present: Fresh and Marlene.  Member absent: Zeus.

After the prerequisite banter and catching up, we hit the road and headed north through Mountain Home.  At Mountain Home, Duke and Fresh had to peel off for a conference call with Hillary and Bernie, I believe.  Or someone.

The rest of us headed on towards Fairfield.  It was a pleasant ride with little or no traffic.  The highlight was spotting a solo pronghorn antelope grazing about 25 yards from the road before reaching Fairfield.  We arrived at Picabo and gassed up.  Although we have stopped here every year, Smooth could not remember being inside and commented on how nice it was.  I hear the nice thing about Alzheimers is that you keep getting to visit new places.

After a snack, some may have had DingDongs, we headed on to Arco.  Again, it was a pleasant ride through the lava fields and traffic was almost nil.  We landed at Pickles for our annual repast.  Duke and Fresh caught up with us at this point.

I had my usual double Buffalo burger and fries with a diet cola.  It was delicious although somehow the late arrivals to the table, G-Man and Big Easy, ordered and received their food first.  Yeah, I know, nobody ever said life was fair.  Much thanks to Krome for sponsoring the luncheon.

We climbed back on our bikes and headed toward Mackay. Again, it was a pleasant ride with little traffic and a nice temperature.  However, the very stiff crosswinds made for "interesting" riding from Arco to Challis.  Not only were the crosswinds strong but gusting.  The conditions kept you on your toes and I was grateful for my steady steed which didn't seem to notice.  I was glad to have the winds instead of the driving hail storm we rode through last year.  I had planned to stop at the Mount Borah viewpoint but it was pretty busy and my horse could smell the Challis barn.

We arrived at the Challis Hot Springs in plenty of time for soaking in the hot springs and hanging out comparing fish stories and complimenting each other on our swim wear.  We settled into our rooms and then checked in after meeting Chris and Bill Freelove, the new managers.  We reacquainted ourselves with Cathy, who has been at the bed and breakfast for awhile.

Most of us hit the hot springs as soon as we could to enjoy the restorative waters.  After a little "nappy", Rip "Thriller" City joined us albeit sporting a black glove instead of the trademark white glove.  Many topics were discussed including male directed medical exams but the traditional rock throwing did not take place as G-Man was not present because he and Bomber took a longer "nappy" than Rip "Thriller" City and never showed until pool time was over.

After a short respite, dinner was served in the Octagon.  I got to sit at the "kids table" and get away from the adults for a while.  Huge steaks, roasted potatoes and asparagus, corn on the cob were the order of the day.  Scrumptious.  Some berry concoction with ice cream topped it off.

Most all of us adjourned to the main house to watch game four of the NBA Finals.  There was also a rumor of a card came that broke out spontaneously in view of the television.  The card game was actually very interesting as the other players only had to help the banker (rumored to be Rip "Billy Jean" City) count chips rather than the usual practice of keeping him from making bad plays.  This practice was rumored to have backfired on the aforementioned other players as Rip "Jam" City came out on top in winnings.  It was hard to tell as Rip "Man in the Mirror" City was the bank and, well, you know.

After a nights sleep and a great breakfast, we gathered for our annual Challis photo opportunity and then started up our bikes for the run of the day.  It took a little longer than usual, as Rip "PYT" City had to uncover his Indian and make ready.  I am still on the hunt for some nice lace to go around the bottom of his Indian cover and top it with a nice pink bow.

It was a little chilly and and everyone put on a few more layers when getting gas at the Phillips 66 in town.  Some members needed remediation training on how to run the old fashioned gas pumps.  It was very nice to get pure premium with no additives.

We headed down towards Stanley enjoying the sweeping curves and the road that winds along the river.  Again, traffic was light and the ride was only interrupted by one knothead pulling a trailer whose mirrors did not afford vision to the rear.  We arrived in Stanley in one piece and stopped for gas and a break.  I put on another layer as I was shivering from the chilly ride. 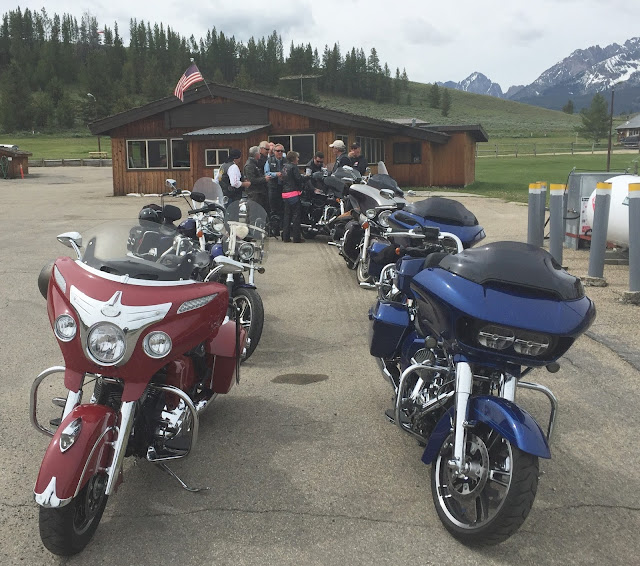 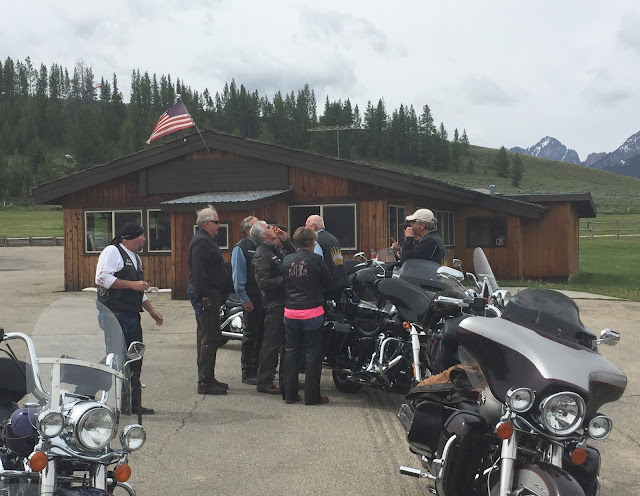 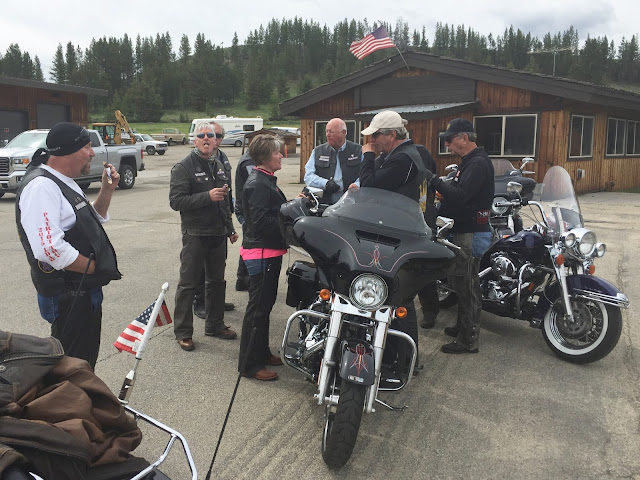 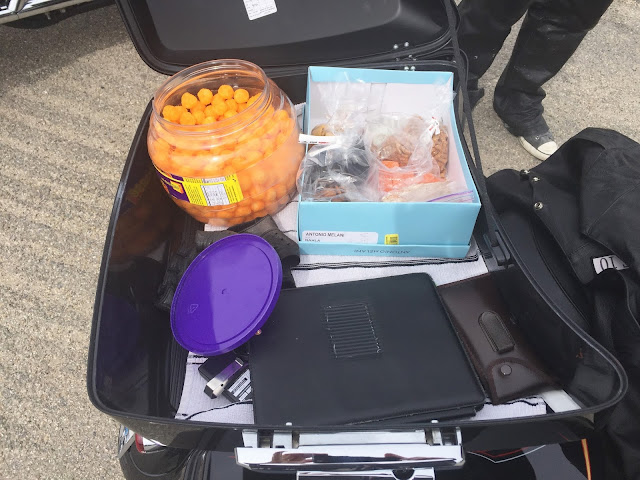 In Stanley, Bomber cracked open "The Snack Pak" and everyone chowed down on the lovely snacks that Bomber's "better half" had created for the ride.  It was a nice break and many other motorcycles came and went while the OMC had a little picnic.  It was still pretty chilly and a few members put on another layer and I grabbed my warmer gloves.

We departed without incident and headed up to Banner Summit.  The speed limit was the order of the day up to the top of banner summit but it was a different story on the other side heading down the mountain.  As I led the pack, I was sure I saw a sign designating an 80 mile per hour zone and being a law abiding citizen, I complied.  (It's my story and I am sticking to it.)  We flew off the summit, enjoying the sweeping and tight turns, and it must not have been too fast as the headlights in my rear view mirror remained constant.  It was exhilarating and Big Easy reported seeing flashes of white light.  He was assured it was okay unless he saw a hand reaching out towards him from the light.

Unfortunately, we came upon a slow moving pickup truck (going the speed limit) and our delightful free fall off the mountain was slowed.  The driver was nice enough to pull over and let us pass in Lowman and we waved our appreciation.  We immediately came up behind another pickup truck carrying brush and branches.  This nice driver also let us pass but I was not surprised as the truck was showing Idaho Vandal license plates.  A little further down we came up behind a soccer mom mini van and our speed was stymied.  This driver was not as cooperative.  We followed the soccer mom van into Garden Valley where we stopped for gasoline.

We fueled up and had a spirited conversation about the changes in the new Mount Rushmore touring bikes and there were some comments made about high speed riding.  It was a great ride off the Banner Summit.  We headed on to Crouch for lunch.

We arrived at the restaurant and it was clear there was new ownership.  The owner quickly set up a large table for us, as though we were royalty, and added a table when the patrons next to us departed.  We ordered our food and it actually came out in quick order.  It was quickly noted that three of the guests, who ordered the fish and chips, had dissimilar portions.  It was brought to the waiter's attention and he suggest one of us give the other a piece to make it even.  Well, I laughed as I was not giving up my fish.  Eventually, the waiter came back and said the portions were by weight and not by piece.  That explanation went over like a lead balloon with Bomber but that was the one ripple in the luncheon pond.  I will get the prime rib sandwich with double meat next time.  We marked our calendar as Rip "Don't Stop Til You Get Enough" City had fries that were crispy enough.  But then he smothered them in ketchup......!?!?  It actually was a very pleasant lunch with no bugs and very nice weather.  It was, by far, overall the nicest time we have had at that restaurant.  Thanks to Duke for sponsoring the luncheon and to Rip "Man in the Mirror" City for sponsoring the ice cream dessert.


We remounted our faithful iron horses and made ready to leave.  Duke seemed to be ready for a quick getaway so I don't know if we "dined and dashed" or not.


It was very nice to cruise down into lower elevations without the oppressive heat that usually greets us as we ride closer to Boise, the city of trees.  We only had one car split our entourage and that was unusual for that stretch of road.  It was probably because of the cool headsets that Duke and Fresh were sporting.

We arrived at Beacon Light and 55 where we said our goodbyes.  Big Easy had ridden Krome's rented Road Glide from Crouch and we almost had to pry him from the saddle as he did not want to give it up.  Our mechanic has told us not to ride a new touring bike unless you want to buy one and he is correct.  We exchanged hugs and handshakes before reluctantly departing our separate ways.  I truly hated for this ride to end as it was definitely right up there on the lists of OMC best rides.

I hope the Summer Run gets here soon.  If you haven't made your reservations, I would get on that.  Orofino is alway nice in July.  And that cowboy hat is still waiting for Rip "Dad Hat" City in Darby.
Posted by GRIM at 5:31 PM 11 comments: 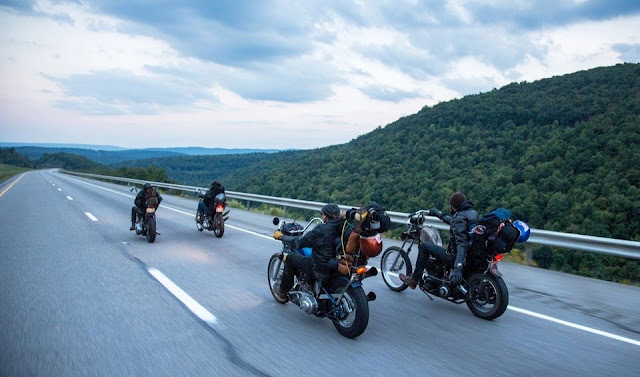 We will be departing from the Chevron at Gowen/I-84 at 8 a.m.  The weather forecast in Challis calls for sunny, and 84 degrees, on Friday and 76 degrees, with a chance of a stray rain cloud, on Saturday.
Posted by GRIM at 12:51 PM 2 comments: