The September OMC meeting will be held at Duke's home, this coming Thursday September 3rd,  at 6:30 p.m.  All members in good standing are invited along with their spouses.  No prospects or guests allowed.

If you have not RSVP'd with Duke, please do so pronto.
Posted by GRIM at 8:15 PM No comments:

The fifth annual OMC Fall Run began with a hearty breakfast at the Garage Cafe in Notus.  Present: G-Man, Smooth, Grim, Bomber, Rip City and his guest.  Duke joined the rolling party later in the trip.  Not present: Big Easy, Krome and Zeus.

We rolled out after breakfast and headed towards Joseph through Parma, Nyssa and Ontario.  The temperature was perfect and the road smooth.  We continued through the backroads and passed through the small town where "Kid Rock" was "born".

As we rolled into Baker City, it was very nostalgic pulling up to the Chevron pumps in the middle of town across from the "Harley Dealer" where we had bought parts a few years ago.  I never get quite used to the Oregon practice of gas pump attendants.

After Scarecrow went to the Post Office, not as much fun as Pony Express, we headed up through Haines, North Powder, Union City, Cove and landed in Elgin for lunch at the White Horse Cafe.  The manager remembered us from last year and the same table of old ladies, who attended the same high school, were seated at the same table they were last year.  Deja vu all over again.  A drunk guy was at the lunch bar saying he was also in the cafe last year when we were.  I don't know if he was hallucinating or if he was correct.

After a lovely repast, the motley crew continued on through small towns and little traffic until we gassed in Enterprise.  We eventually rolled into Joseph through the thickening smoke from local or distant fires.  After parking and unpacking, we went into tin sign hunting mode and also found time to procure drinks and expensive chocolate along with a nice walk up and down Main Street.  Rip City again struck out unable to procure another "specialty" shirt at the local fishing shop.  The obligatory visit to the hardware store was made so we could take in all the wonderful sights and smells found therein.


G-Man, Smooth and Bomber then headed back to Enterprise to check out some rust that Bomber had smelled when we had traveled through there earlier.  I half-expected him to return with his Harley on the flat bed of a 1959 truck but he had left it behind.  G-Man had scored a great automotive sign in an antique store where Smooth had failed to get the owner lady to come down a buck fifty on a six dollar and fifty cent item.

We then went to the Stubborn mule and had the usual Friday night 90 minute wait for our food.  The upside was the food was very good and the company and jokes of high caliber.  And Rip City was cocked and locked for the first time in a while.

We all returned to the Indian Lodge Motel where slumber awaited us.  There was a rumor of a card game where a new variation of cards was purported to have been played.  I tend to believe no sane person would play "seven card draw" but it might have happened.  All I know my wallet was light by five dollars the next morning and Rip City was missing $1.60.  Smooth was strangely happy however as he had found some extra gas money.

The next morning found us at the Cheyenne Cafe where the portions were still as huge and Rip City again was disappointed at the undercooked condition of his hash browns.  Mine, however, were crispy and tasty.  The picture of the Thueson brothers riding together on Bomber's bike down Main Street will haunt my memory for a while, however.  You can guess who was riding bitc.....um.....on the back.

We eventually hit the road and headed towards Hell's Canyon.  Just after turning on the old road, we were "greeted" by some deer who thankfully ignored Rip City as he didn't even see them.  We continued on until we reached the lookout where we snacked and told lies and stories.

We departed and headed down the mountain until the road t-boned into the highway.  We turned to head to Scotty's when we happened upon Duke coming the other direction.  It was great to see him and he turned and jumped in with the group and we stopped at Scotty's in quick fashion.  We were ready to draw straws to see who would venture into the store to approach the scary lady owner but it turns out she sold the place to her son.  He was present and took our money.  Coincidentally, his name was Scotty.

Duke regaled us with his recently completed trip on Route 66 and I decided maybe that wasn't my dream ride anymore.  Four Corners.....here I come.

We continued on around the reservoir and into Cambridge where we stopped at the Ranch House (formerly Mrs. G's) for lunch.  Curiously, they only had one kind of pie.  We had a nice lunch while Duke grilled our guest about his religious, political and second amendment affiliations.  No pie but plenty of ice cream was had by some of the members.  Having incurred serious gastro-intestinal discomfort at Scotty's (two Starbuck's cold coffee drinks.....I'll never do that again...almost called for an ambulance) I passed on taking on any more sugar and lactose.

We climbed back on our rain spattered bikes and continue down through MidVale, Weiser and Payette.  We were rained on intermittently and with varying intensity for the rest of the ride.  The rain was strangely refreshing for me but I blame Rip City for jinxing us with the rain as he had donned his rain jacket in Cambridge.  On Sand Hollow Road, my life passed before my eyes as a silver Jeep made wide ranging turn in front of the pack causing me to wonder if a collision was imminent but somehow the driver found her lane.

We said our goodbyes at the Sinclair Station at Highway 44 and 30.  It was a great ride, one of our best, along with being quite cathartic for the most part.  I am glad to be a member of the OGRES and I am sure there are many more thrills, chills and NO spills in the future.

I hoped you enjoyed this new style of run report with more photos and less prose.  I did have one more photo of Rip City's new gun carrying style but it is omitted by special request.  Copies are available but very expensive for purchase. 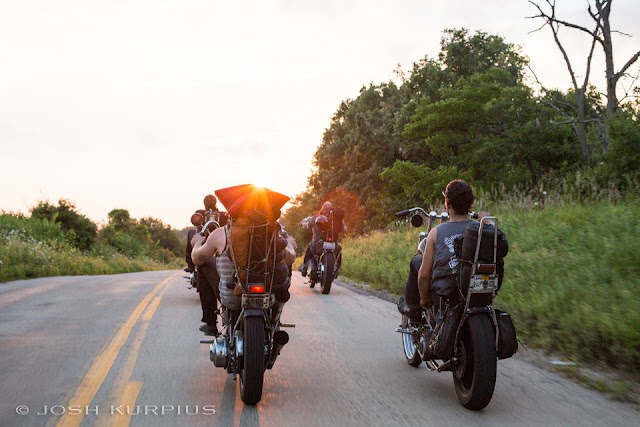 Meet at the Garage Cafe in Notus at 8 a.m. for breakfast and we leave from there.

Details here at this link: 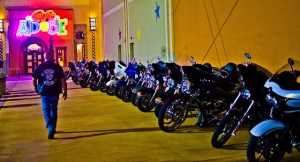 No, it is not being held at the Cafe Adobe but, better yet, at Duke's home.  It is the yearly barbecue where spouses are invited.  Please bring your spouse to this meeting.  No prospects or guests otherwise.  Please RSVP with Duke so he knows how much food to plan.

Contact Duke if you have any questions.
Posted by GRIM at 3:08 PM No comments:

Lolo Pass at the Grove on the Summer Run


I think the Go Pro missed Rip City but got part of his Indian, Grim was blowing a kiss, Duke was really mad, Big Easy was being easy, and G-Man was still trying to figure out his camera.
Posted by GRIM at 9:03 AM No comments: