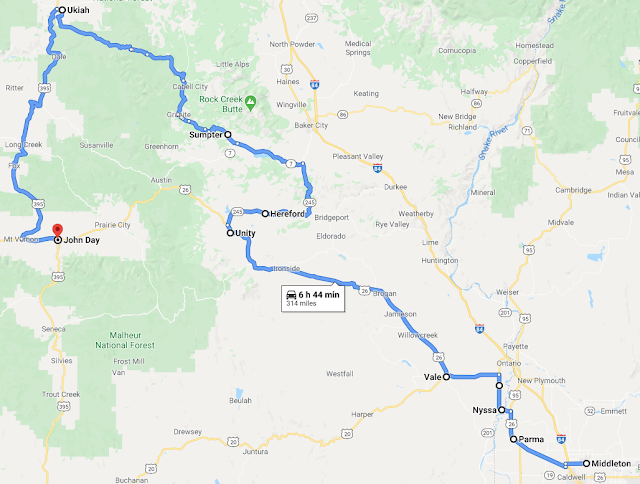 G-Man, Krome and Rowdy did not start the ride with the OGRES MC main group as they were going to meet us in John Day that evening.

The day began with almost perfect weather albeit to the cool end of the thermometer. We rode pleasantly through Parma, Nyssa, Vale and took our first break in Unity. We made use of the one bathroom and grabbed some snacks.

We proceeded through the mountains and enjoyed some great twisted roads both forested and flatland. It was one of the best rides of the decade through the area to bring us in to lunch at Sumpter.

We ate at the only place open in town after gassing up at the only gas station in town. There was only one pump so Grim, Leann and Rip City shared a tab. The fuel was no ethanol premium at a premium price of $34.00 for the three bikes. Wow.

The lunch was pretty good and we lucked out just as a large table was opening up. We made fun of each other but we were all especially jealous of Rip City's choker necklace. Rip City was as fashionable as always.


We climbed back aboard our iron horses and headed on up the road through some more great curves, turns and landscapes until we reached the infamous town of Ukiah. For history on Ukiah, read back in this blog about the 2016 OGRES MC Fall Run. We stopped to take a break but the store was closed, no surprise, and we took a memorial picture just as we did in 2016.


It was smooth sailing down to Long Creek, the site of the infamous Sonny Barger incident years ago, and on to the mountains. The weather had cooperated, up to this point, and we stopped for a break at a roadside campground.


We hit a spot of wind and rain between the campground and John Day but we quickly rode through it. We arrived in John Day and found the Best Western and our rooms. Some members took a nap while other members shopped and refueled.

Grim was looking forward to eating at the Grubsteak Mining Company Restaurant having great memories of eating there 10 or so years ago. The Fergus Burger was awaiting. In the vein of being kind rather than right, let's just say the meal was not as good as remembered but did fill the belly. As we ate, the trio of G-Man, Krome and Rowdy could be seen pulling into town through the front window of the restaurant.

We met up with the aforementioned late trio as we were heading back to the motel and compared experiences and notes. We recommended they go to The Outpost for dinner. It was reported it was much better than what the larger group experienced.

The next morning came with a pretty steady downpour of rain. We headed to breakfast at the Outpost. We had to sit at two tables to meet the Covid-19 friendly guidelines. The service and food were great. By the time we finished our morning repast, the rain had subsided and we vamoosed before it could start up again. 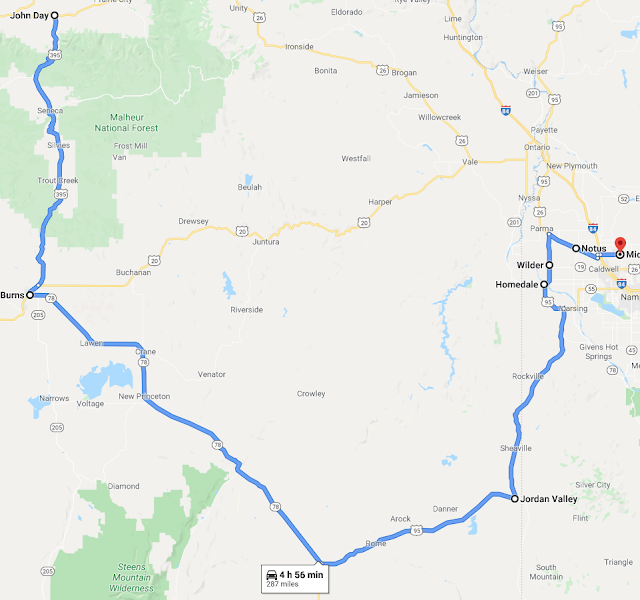 Due to the forecast of high winds and heavy rain in the Jordan Valley area, it was decided to go to Burns and then take Highway 26 to Vale. We experienced a little rain on the road the Burns but it wasn't as bad as expected.

A short, turned long, stop for gasoline occurred in Burns before we headed on down Highway 26. It was a windy but pleasant ride. Traffic was light and mostly well behaved. Next year we will take the southern route as many of the group have not experienced that journey.

We stopped for gasoline in Vale and found the Starlite Cafe right next door. We took the opportunity to have lunch there.

We had a great lunch with crispy, crispy, crispy, very crispy chicken nuggets and tater tots. At one point, Joy instigated a cracker food fight by saying, "You can't do that". After the crushed crackers were cleaned off of Joy, Rip City and the surrounding area we had a great meal with exquisite conversation. Homemade pie was the fitting cap of this experience.

We said our goodbyes, at this point, after taking the obligatory photos. We had back towards the Treasure Valley with members and guest peeling off and heading home.

Gnarly Rides or Grim's Bikes Over the Years


The OGRES MC 2020 Spring Run will be held as scheduled on June 12th and 13th.. The safety briefing will be held at 7:45 a.m. at the Sinclair Station at Old Highway 30 and Highway 44 just west of Middleton, Idaho.

Details at this link:


Be there or be square.