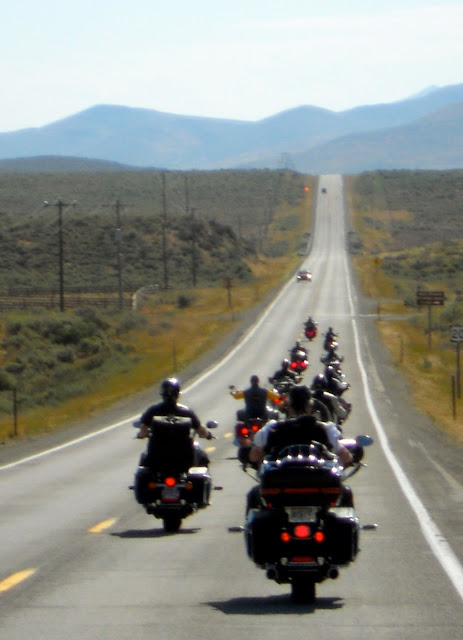 Leading the pack or a look inside Grim's brain:


Have a basic pre-ride briefing outlining rest stops, lunch stop and such.

Don’t pull out from a stop until everyone can do so safely.  Avoid “speed racer’ and unnecessary passing movements.

Accelerate and decelerate slowly and gradually to avoid yo-yo and accordion effects.  This includes initial movements and speed limit signs.

Allow the group to “bunch up” at controlled intersections, when possible, before proceeding.

Don’t pull over until it can be done predictably and with enough room for all.

Don't pull out until it can be done predictably and with enough room for all.

Do the speed limit or, at most, 5 above depending on road and traffic conditions unless group is previously advised.

Don’t leave anyone behind due to speed or ability.  No reason for anyone to have to catch up.

If all riders don’t make it through a controlled intersection, the group will slow down in the right hand lane or pull over if roadway does not allow.

Any Leader commands override everyone else unless there is danger involved.

A few notes on sweeping.  You could become the sweeper at any time.  Unexpected turns, the bike at the back waits, etc.