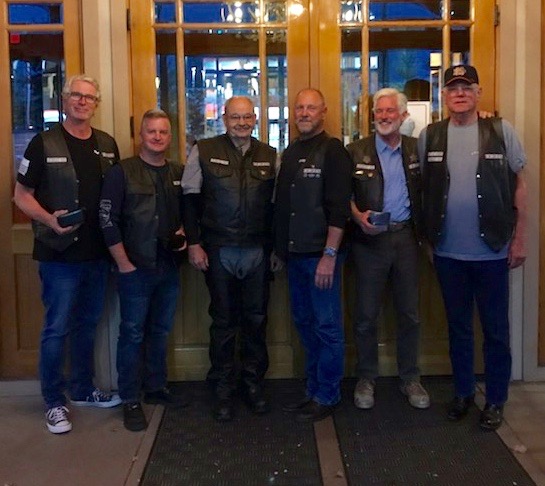 We met at the Fairview Clubhouse, at 6:30, and the rumble from the Harleys was an exciting noise.  Sadly, Rip City decided it was too cold and drove is “blinged” out Super Truck.  One other member did not ride, but his name shall remain as unidentified.

As we sat to start the meeting, several were not aware that our esteemed President was not going to be in attendance since he was showing a group of highly trained police officers in Plano, Texas how to hold and shoot a gun.  Several members almost shed tears since it was the first time in anyone’s memory that our much-loved President would not be there to lead us.

However, the VP and the scary Sergeant at Arms, calmed fears and began the meeting.  Members talked about cars, cycles, knives, and recent events, and then we got down to business.

Someone, not the VP, suggested that we get into and “dial in” an event for the summer, apart from our normal rides.  A Super Ride!  It was decided that since most of the members, except Gundy and G-Man, had never been over Logan Pass and even seen Glacier National Park, that that should be the objective.  This ride interest even surpassed a coast ride or a Redwood ride.  It would take some planning and as we discussed dates other than our normal rides as scheduled, we found no time on anyone’s calendar, where we would all be free at the same time to make this ride.

Then, almost by divine providence, someone suggested that we already had a three-day ride scheduled in the heart of the summer, where everyone was free to make the trip.  Then, frowns were seen as we knew our missing President would in no way miss his time in Orofino at the Rivers Edge Motel.  Then, a miracle occurred, and Gundy suggested that the best route could still have us there the same night that we all had reservations.  And, after further discussion, and evaluating several route changes, we found that we could do this ride, and stay in Orofino, and ride over LoLo Pass as well.  Excellent!!!  Then Gundy suggested… why not leave day one and see if we could all get reservations at Powell, Idaho, (Lochsaw Lodge) where we usually enjoy marvelous meals.  Another great idea for Wednesday night, the first night of the ride.  So, the ride was suggested, leaving only the details of the Thursday night motel.  Of course, we would have to cancel our Salmon motel, if everyone agreed, even our President.  Then we voted on this and all decided it was a great plan.

Then it was left for someone to discuss this with our fearless leader, the one with the guns, knives, and outlaw experience.  Not surprisingly…no one, and I mean no one, wanted to suggest this to him, in fear of ridicule, mockery, and losing one’s membership to this heralded and hard to get into club.   So, after much discussion and deliberation, it was suggested that the VP break this news to him and see if there might be any way he might consider this one-time Super Ride event.  Gundy and G-Man, having ridden this way several times each, would endeavor to create some mapping to make sure that no more than 325 miles would be ridden each day, to allow Maximum Fun with other club members.  And, if Smooth can come, we could have the perfect refreshment truck for any stop we might car to make!!!

Finally, after leaving the clubhouse, all wandered over to the Sockeye grill for a fabulous evening dinner and more fun visiting and roasting those not present.  And they know who they are…Grim, Smooth and Slick!  Bunch of Wienies!  But we missed them anyway.  And, as usual, many members had salmon, some had pasta, and one had a real interesting plate, that included real, real, real crispy french fries.  So crispy, that he did not even eat them all.

We adjourned, walked back to the clubhouse, and it was the perfect warm night to ride home.  And all were still wondering who might have the courage to suggest the Super Summer Ride to the very much missed, President.