OMC Members present: G-Man, Rowdy, Gundy, Grim, Smooth and Duke. OMC members absent: Krome, Slick, RipCity, and Bomber. Guests: Joy and Lee.
Firstly, Grim feels this was one of the most relaxing and enjoyable OMC sanctioned Runs thus far. It just felt smooth and everyone seemed to have a great time.
Special thanks to Road Captain G-Man who was the sweep rider. The President is able to relax knowing G-Man "has his back" keeping the Prez on the right track.
We met at the Star Cafe and had a surprisingly good breakfast with a great server. Everyone was genuinely happy to see each other.
After breakfast, the pack headed north through Emmet and then continued through New Plymouth. We made a quick pitstop near Payette before continuing through Parma, Wilder, Homedale and Marsing.
It was a cool morning and it was very enjoyable riding the river between Marsing and Walters Ferry. We made a stop in Marsing before continuing on through Murphy and over through the great country until we arrived in Grandview.
As planned, we ate at the little restaurant in Grandview. We got a great table back in the bar and we had a great server. The meal was unexpectedly great and Grim could not remember when he had enjoyed a BLT that much. We will definitely stop there next year.
After lunch, everyone mounted up and we headed out passing through Bruneau, Hammett, King Hill before making a quick stop in Bliss. 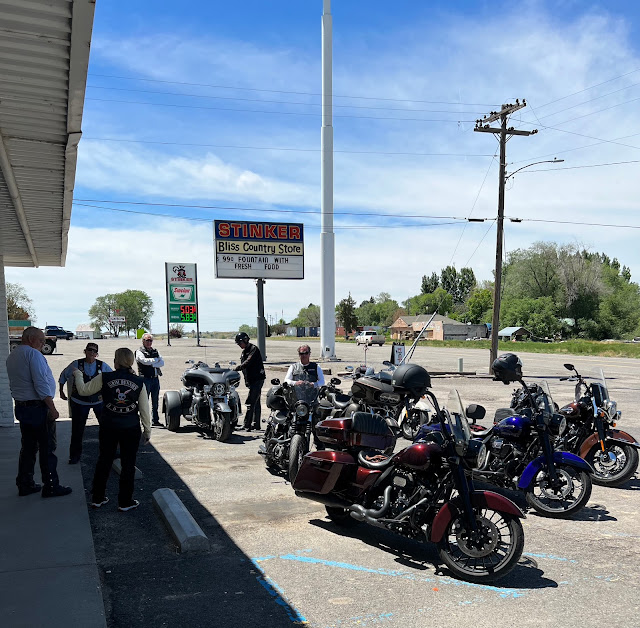 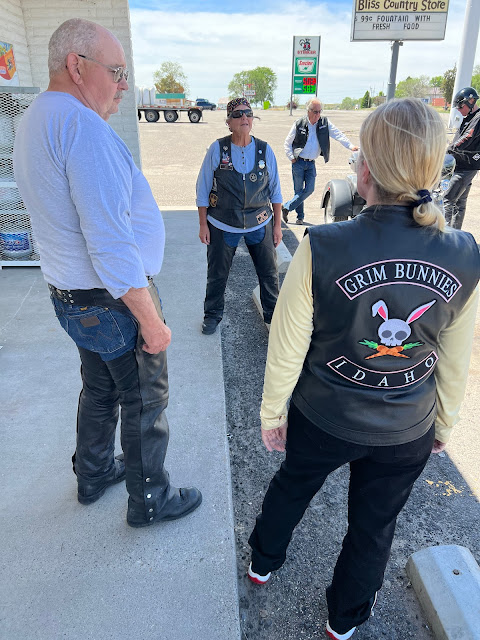 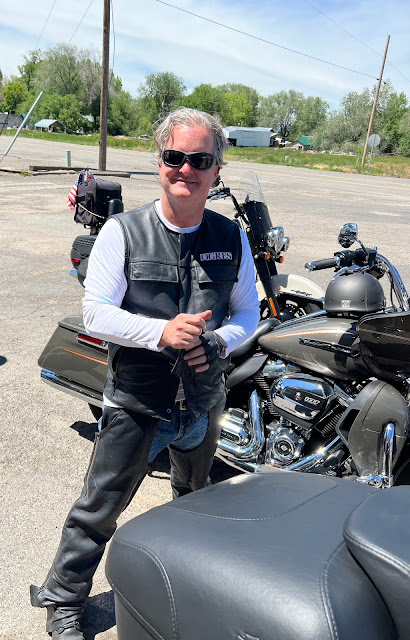 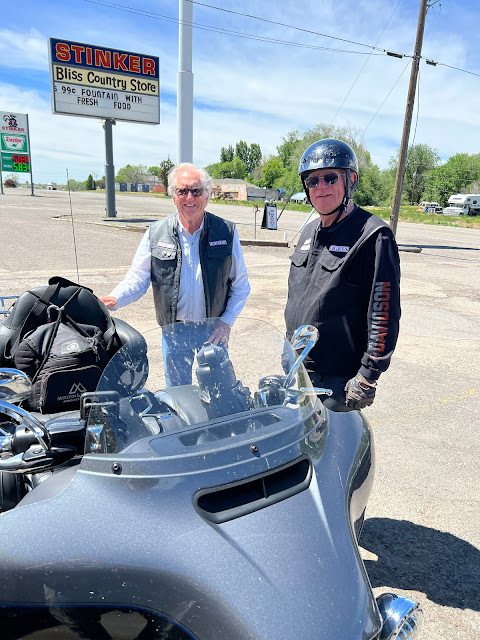 It was darn hot in Bliss so we did not linger very long. We did get to witness a semi truck bring in a large piece of a giant windmill. Pretty cool.
We then rode down the Malad River road instead of taking the main highway. During this route, several rattle snakes were encountered on the roadway making it a more thrilling ride than normal.
We arrived in Hagerman at the hotel and we all checked in. It wasn't long before we all piled into Smooth's chase vehicle and headed to the pool. 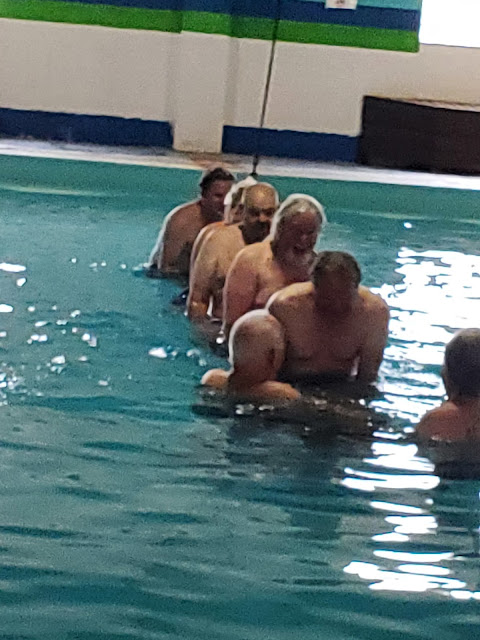 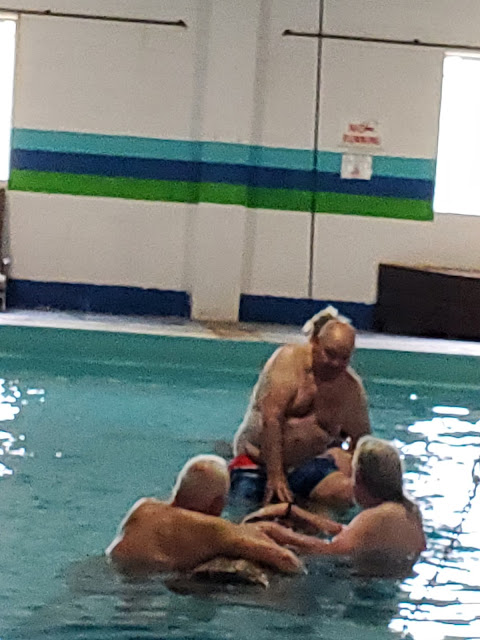 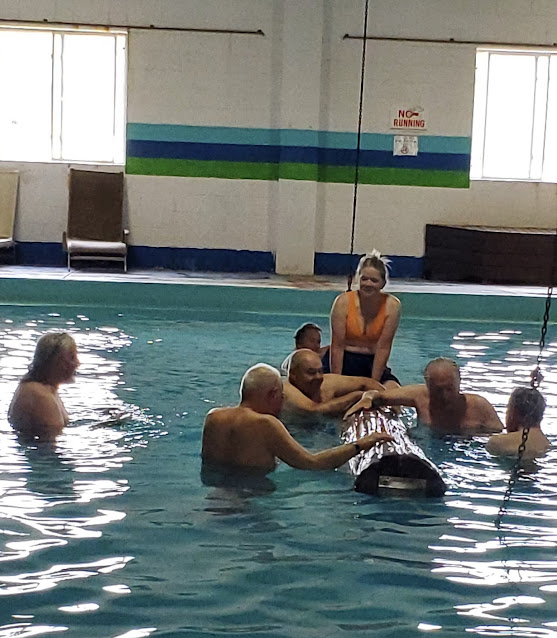 A lot of fun was had trying to see how many OGRES members and guests we could get on the big log at the same time. Beside that frivolity, the natural Artesian mineral water was at the same time refreshing and relaxing.
We then headed back to the hotel, changed clothing, and headed over the the Snake River Grill for dinner. Grim has never had a bad meal at this place and this experience was no different.
After dinner, a card game broke out on the upper deck of the hotel. We played Texas Hold "em the entire time instead of switching games with the dealer. Wholly it was much more fun and everyone learned a lot about the game from Smooth and Rowdy. Great entertainment for $5 and Grim even made a couple of bucks. 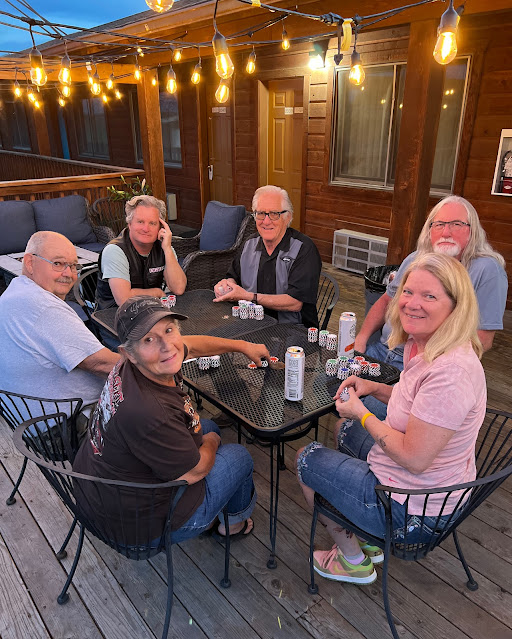 The next morning, breakfast convened at the Snake River Grill where Duke notified us that Smooth had taken ill during the night and had departed around 6:30 a.m. for Boise. Later we learned that Smooth had arrived safely home. His presence was missed at the back of the pack.
We all had a nice breakfast and then headed out. We traveled through Gooding and headed north to the Fairfield highway. When we arrived at the intersection, Duke headed out to Boise, through Fairfield, to address a family obligation. We turned east and continued on until we made our first stop at Timmerman Hill.
After photo ops, we headed north through Bellevue, Hailey before making a quick fuel stop just south of Ketchum. As expected the traffic was pretty thick through this corridor but we emerged unscathed. It was a beautiful ride up past the Boulder Mountains and up the fun road to Galena Summit. We continued on until we made a stop at the Galena Summit scenic overlook.

The view was breathtaking as the Sawtooths are the most beautiful and grand. It was a very nice stop. Road Captain G-Man expressed a desire to have lunch at Redfish Lake instead of Smiley Creek so we mounted up and headed there.
It was a very nice ride through the valley until Grim missed the turn to Redfish Lake. Where did all the signage go?!?! G-Man got us turned around and we arrived at a very crowded Redfish Lake Lodge. 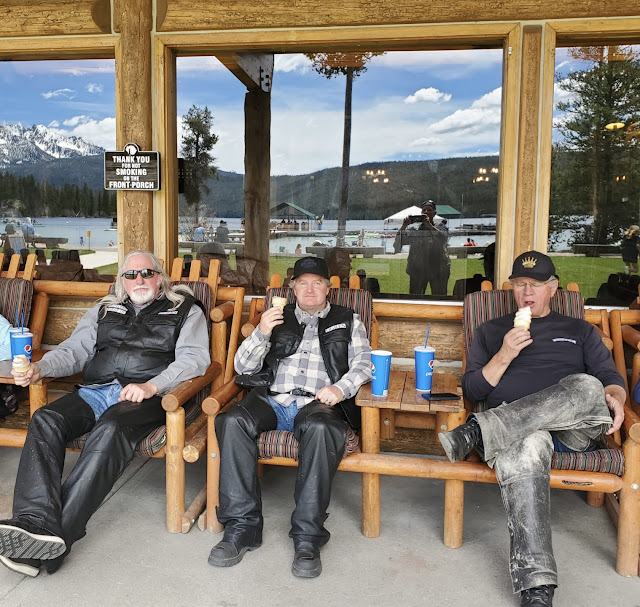 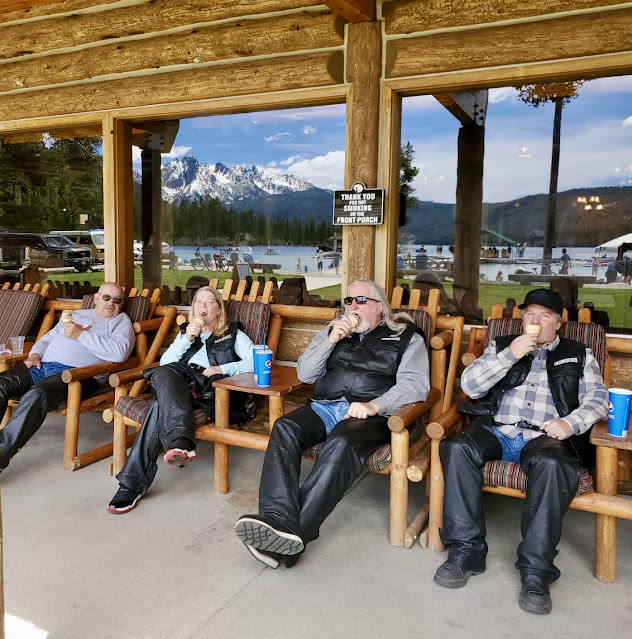 We barely found parking spots but were able to squeeze into the parking lot. We ordered food at the outdoor restaurant and the grub was pretty good especially the ice cream we ate while sitting on the Lodge veranda. It was fun people watching and was unexpectedly nice people watching and sitting in the shade. We actually had to use will power to get up and get back on the road. 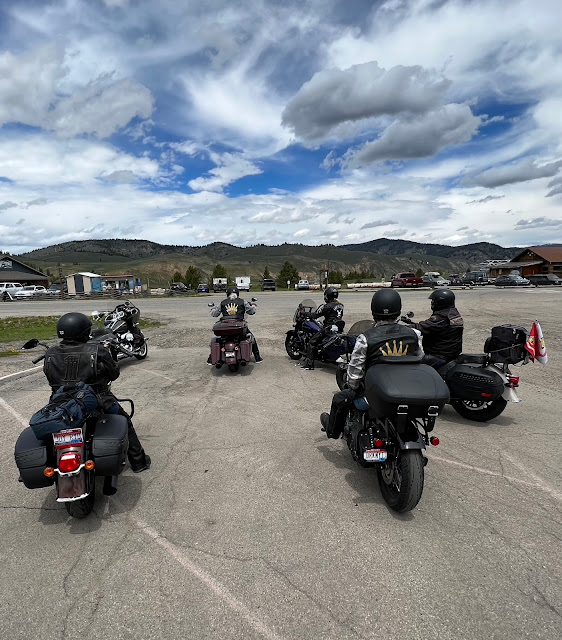 It was short but scenic ride to a fuel stop in Stanley. It wasn't long before we were heading up the valley towards Banner Summit. 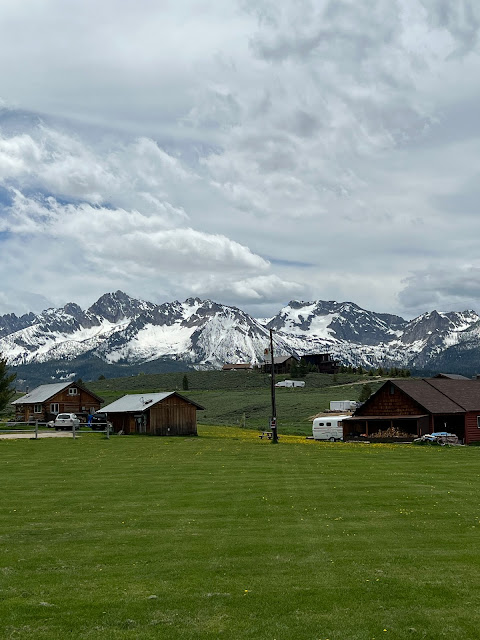 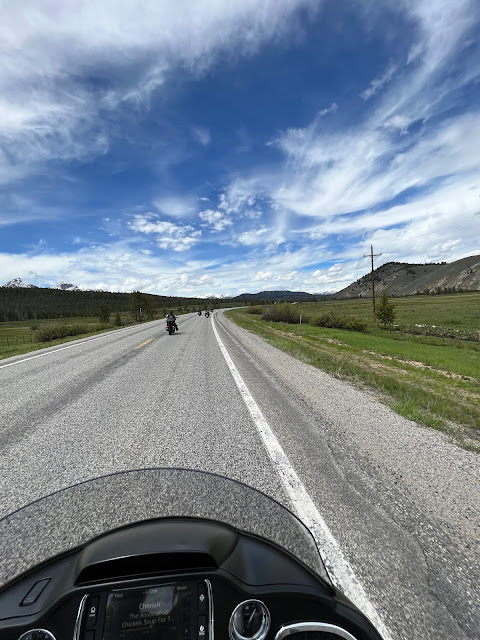 We cruised up the highway with hardly any traffic and went over Banner Summit and down the mountain into Lowman. We stopped at the Lowman Lodge. It turns out, the Lodge had reopened only a couple of days earlier under new ownership. We manage to get something to drink and headed on down the mountain.
We passed through Garden Valley, onto Banks, and then on down to Horseshoe Bend. We stopped in Horseshoe Bend for fuel and decided to say our goodbyes there.
Again, it felt like a very relaxing and smooth OMC Run. The most remarkable thing about the Run was the almost complete absence of traffic. The only time we encountered much traffic was through the Ketchum corridor. No doubt the Thursday-Friday format was part of the equation. So nice.
See all y'all at the July meeting.
Text by Grim
Photos and videos by G-Man
Posted by GRIM at 1:42 PM