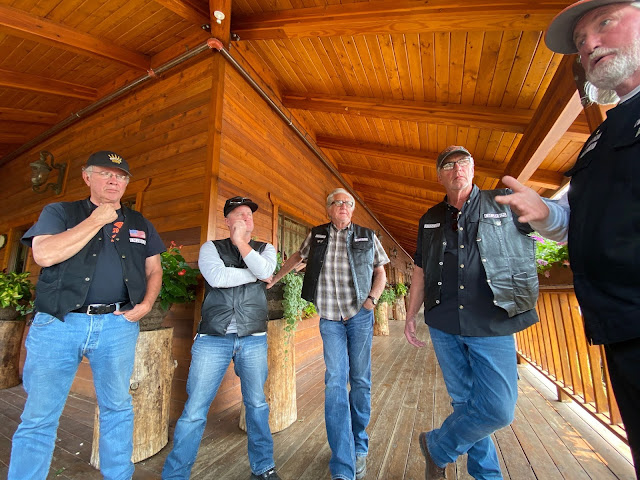 A special meeting was held on the last day, July 17, of the 2021 OMC Summer Run. Since we don't have a meeting until November, due to the OMC Barbecue being held in September, important Club business needed to be accomplished at this time.

Grim had noted during his career, and by observing life in general, that people often do a lot of work without recognition, compensation, or credit. Many studies show that recognition is more powerful in people's lives than money or sex.

Grim had observed that Rip City had been working hard for the past couple of seasons and had unintentionally been fulfilling the role of Vice President. His documentation of the Runs and Meetings in video, word and photos had taken a huge load off of the President's back. Rip City has always been effective and timely in his interactions both in and outside the Club. Most recently Rip City interfaced with the Pipe Hitters Motorcycle Club while the OMC was in Orofino. This led to a fun and interesting time interacting with the PHMC.

Additionally, Gundy and G-Man have already been doing the work of Road Captain both on and off the bike. They both have assisted the President and the Club helping to keep everyone safe on the road. Gundy and G-Man are expert and adept at devising and creating Runs and rides for the Club.  Both the Summer and Fall Runs were devised by G-Man and they are Club favorites.

Smooth made a motion that G-Man be thanked for his years of service to the OGRES Motorcycle Club. Smooth further moved that the OMC Vice President position be filled by Rip City. He also moved that Gundy and G-Man be the Road Captains for the OGRES Motorcycle Club. The final part of his motion was that the aforementioned election requirements be waived for this election. The motion was seconded by Rowdy.

All motions carried with a unanimous vote of the 8 members present. The requirement that 3/4s of the Club membership must vote in the affirmative for a new Primary Officer was met.

The OGRES Motorcycle Club thanks G-Man for his years of service to the Club.

The change in Primary Officers was effective July 18, 2021.

The meeting was adjourned.