The OGRES 2021 Fall Run began inauspiciously at best. OMC members were to meet at the Garage Cafe at 7 a.m. Rip City, Duke and Slick arrived to find the Garage Cafe not opening until 8 p.m. They forged ahead and had breakfast in Vale.

Grim, on the other hand, was waiting for Boise Cycle to open up as he had performed a safety inspection on his Road King Special the night before. Finding the rear inflation to be at 18 psi., instead of 41 p.s.i., further inspection found a screw imbedded in the rear tire. Grim notified the aforementioned trio to go ahead without him and he would catch up if tire service could be procured.

Carl Davis at Boise Cycle was slammed and he was unable to do the service so Grim went to High Desert Harley. The dealer was able to install a new tire and Grim was on the road by 11 a.m.

(Writer's note: Always check the Harley dealer's work before you leave. The drive belt was not checked by the mechanic and the belt was super overly tight. I did not notice it until I took off my full face helmet after arriving back in Idaho on the second day. Then I could hear all the extra noise and whining caused by the improperly adjusted belt. Carl Davis, at Boise Cycle, adjusted it properly on Saturday and hopefully no damage was done)


Grim cannot attest to what occurred in Notus, Vale and Baker City in the above photographs. Further inquiry may be made with the three out of control OGRES members.
Grim and guest caught up with Slick, Duke and Rip City in Baker City at the Chevron Station just off the middle exit from the freeway.  The trio had already had lunch so Grim and L Dub filled up on chicken gizzards purchased at the gas station.
Grim had recalled going out the road next to the Chevron in the past but couldn't remember the route exactly. He asked a local if this road would take us to Union and got a positive reply in return.
First mistake: Grim deviated from the original plan and took the alternate route. Second mistake: Grim made a right hand turn at the first likely looking intersection instead of going straight to the correct second intersection. Dang.
The pack of OGRES members took this highway for quite a ways with Grim continuing to expect a left hand turn any minute that would send us back in the direction towards Union. It never happened. Finally, Grim pulled over, Duke got out the maps and it was determined we were headed towards Halfway and Oxbow instead of Union and Cove.
Grim was really wishing G-Man was on the Run as he knows all the roads and is expert at making sure Grim is not leading the bunch astray.
Swallowing his disappointment, Grim led the pack towards Halfway. It was kind of fun to check out Halfway and we stopped there for a break. Then we continued on until we found the round that would take us up past the Hells Canyon overlook and on over to Joseph.
The ride up over the mountain was fairly uneventful except for having to navigate through 3 or 4 groups of cattle on and along the road. Grim also went a little too fast making it more difficult for the group to navigate the potholes and rough road. Sorry, guys.

We stopped at the intersection to Imnaha for a few minutes to warm up. Okay...just for Grim to warm up and everyone else wondered why we were stopping so close to Joseph.

We proceeded on down the road and into Joseph, Oregon. We went straight to the Indian Lodge Motel as the lone Chevron gas station was backed up with folks wanting fuel.
We all checked in smoothly until it was discovered that the motel had lost Duke's reservation. All possibilities were checked but no reservation could be found. The motel was full due the the huge vintage car show in town that weekend. Grim will not go into detail here, but the customer service was less than stellar except the ladies did try to find a room up the road.
Rip City jumped in, at the point, and suggested Duke take his room and he would bunk up with Grim, due to Grim having a room with two beds. This turned out to be a perfect solution and we adjourned to our rooms. Grim went across the street and secured a reservation at the Stubborn Mule for dinner.
At the appointed hour, the intrepid travelers sauntered over the the Stubborn Mule and found that it had been arranged for us to sit outside in the rear covered patio. This windfall turned out to be a really nice experience. A table with children was just leaving so that left our table of adults with one other. We had a very nice meal in a super environment and it was agreed we would make sure to get these arrangements in future years.
We went back to the motel and planned to grab some shut-eye. Suddenly, a card broke out in L Dub's room with four players. Rip City lost steadily until Grim set a deadline for card playing to cease at 11 p.m. Rip City's acumen and luck changed and he almost broke even before he bailed. The other players kept on for a bit longer. At game's end, it was not surprising that Grim was the big loser (since he had pretty much been a loser all day).
The motorcycle quintet met at the Cheyenne Cafe for breakfast the following morning. It was the usual great food with equally great company.
Shortly thereafter, we hit road to head back over the mountain towards Hells Canyon. This time the trip was a much nicer as there were no cattle and Grim went much slower making it easier to negotiate the potholes, corners and rough road. Our first stop was the traditional one at the Hells Canyon Overlook. 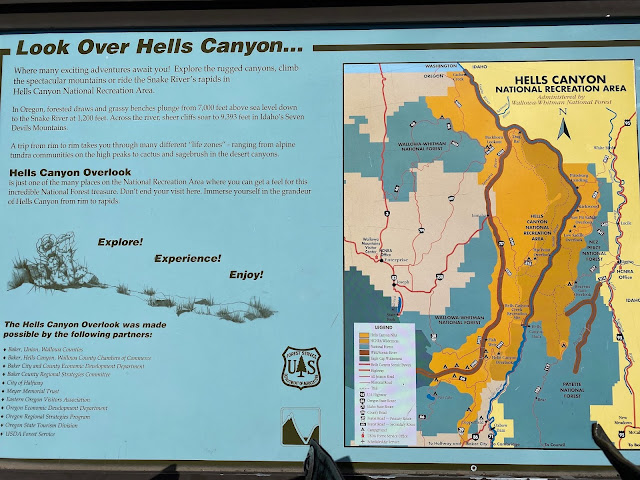 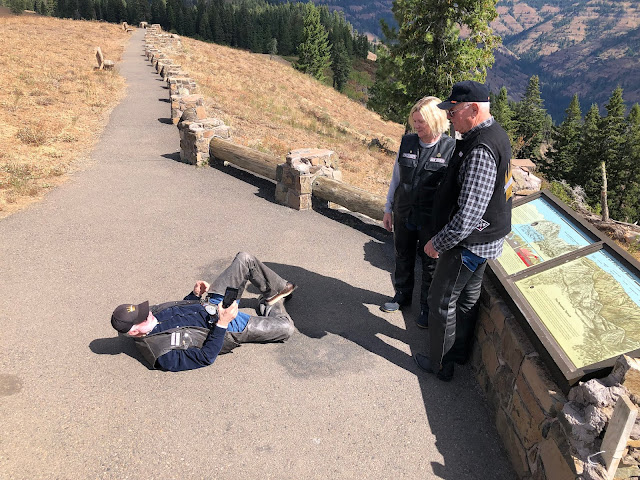 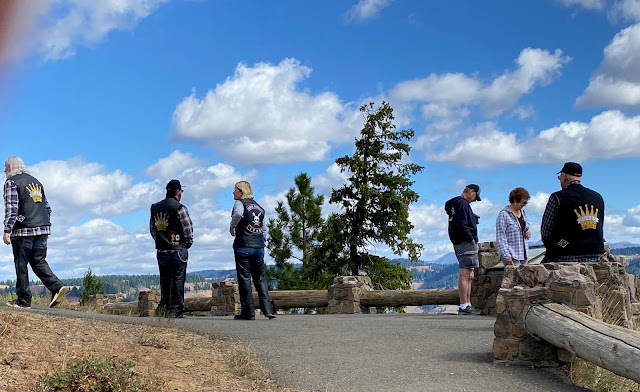 The overlook was much nicer than in years recent. There was hardly any smoke and the view was wonderful. It was also unusually quiet and the air smelled great.
The ride down the backside of the mountain was smooth, quiet and a little faster with more straightaways. We stopped at Scotty's place to take our heavier clotbing off and prepare for warmer weather. A small banquet broke out with oyster treats.
We continued on around the reservoir and across the dams. It was a nice ride over and around and up over onto Cambridge where we made a quick stop for fuel. We topped off and headed off down the road towards Midvale. We came across some road construction but were lucky to catch the green light with perfect timing to ingress down the one lane detour.
We stopped at the little cafe in Midvale for a quick lunch. It was the usual great diner food at a pleasant table. Our server was great and Rip City was able to get his usual bowl of vanilla ice cream.
We climbed back on our bikes and headed down through Weiser and Payette with little traffic and what traffic we encountered was moving right along.
We made the turn on Old Highway 30, in Payette, and cruised right along until we encountered the police who followed us for a while causing our speed to lower a tad.
We wished the police was still behind us as we were south bound on Old Highway 30 at Galloway. A "lady" in a Buick LeSabre was westbound at the stop sign. She suddenly and unexpectantly pulled out in front of the northbound traffic. Grim could not see how the oncoming truck kept from t-boning the Buick as she slewed across the lane and turned left right in front of our pack of motorcyclists. We had to brake heavily but a collision was averted. The "lady" then accelerated rapidly while weaving within her lane. Probably under the influence of intoxicating substance.

We rolled on to the Chevron at Old Highway 30 and Highway 44 where we stopped for the final time for this Run. Goodbyes and such were made while declarations of gratitude for a great ride abounded.