The OGRES MC 2022 Summer Run began at the appointed place and time. It was a fairly nice morning and the safety briefing was a little more extensive due to the route and some new riders.

We climbed aboard our bikes and headed up Highway 21. The weather was cool and the traffic fairly light as we made our way past Lucky Peak and Hilltop. It was really good to be leaving the Treasure Valley behind. We cruised along until we made a short stop in Idaho City to adjust clothing and take a bio break.

We continued our ride through the twisties between Idaho City and Lowman. The road surface wasn't great but the curves were fun and the scenery was beautiful. The little bit of traffic actually pulled over for us and let us pass.

We rolled into Lowman and made a stop at the newly reopened Lowman Lodge. The Lodge folks were more prepared, than our last visit, and we were able to get water and such. Nice people.
After a short respite, we continued on up the road just after we observed 20 plus bikes turn off the Garden Valley highway and head up towards Banner Summit. We might have caught them until we came upon road construction where we just missed the pilot car. We only had to wait about 15 minutes until we were able to follow the pilot car through the construction and headed on up to Stanley.

Upon our arrival, some stopped for gas while Grim headed over to Lower Stanley to check out the lunch spot. The Bridge Grill is no more... as it was discovered that all the signs were down, windows boarded and door locked. Bummer.
When we first rolled into Stanley, Grim had spotted Sawtooth Luce's and thought it looked interesting. We rolled back to that restaurant and it turned out to be very nice, both in service and in substance. We had a very nice lunch.  We continued on up the road towards Challis and Salmon.
It was a very nice ride through Clayton and up and over to Challis. The closer to Challis we rode, the higher the temperature became. We stopped at the Exxon station and took a quick break. Much water and ice cream was taken on until it was time to head on up the road.
After a nice ride up the canyon to Salmon, we pulled into the Stagecoach Inn. We parked our bikes and checked in. It was found that some of our reservations did not stick but they had enough rooms so no one had to sleep in the parking lot. (Reminder: always confirm your reservations a month prior to the Run.)
Some took advantage of the pool before dinner and others settled for a shower. We head up to the Shady Nook for dinner. The service and food were greatly improved over the experience we had last year. It was a nice time. We sat around the pool afterwards and had a great time talking and swimming. However, the mosquitoes came out and ran us off to our beds.
The next morning we awoke and had "breakfast" in the hotel. It is ironic that the Stagecoach Inn is more expensive than the Best Western in Orofino. The amenities in Orofino are so much nicer along with the breakfast. Oh well.
G-Man awoke feeling "wiped out" and very much under the weather. He looked rather gray and it was hoped it was just a little fatigue. He stated he would isolate from us as much as possible just in case his condition was contagious.
As we finished loading up and had our safety briefing, the sky began to lightning and thunder. As we rolled out, the rain began to fall. We stopped at the Sinclair and tried to fuel but their gas pumps were all fouled up and we finally gave up. 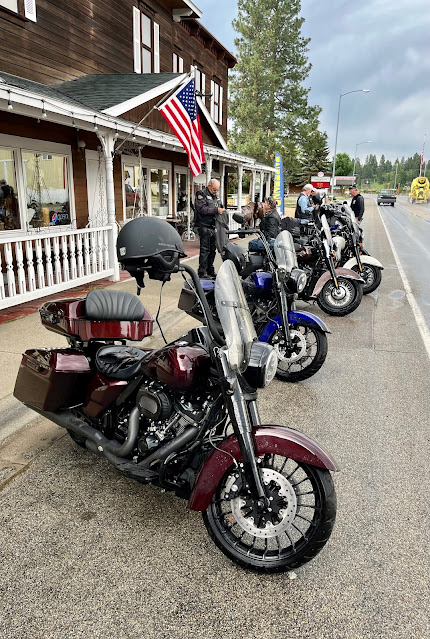 It rained on us the whole way from Salmon to Darby but the downpour was not too heavy. The road and curves were just as fun even though the speeds were lower due to the rain. The rain subsided as we rolled into Darby and we checked out the cool shops and grabbed a snack or two.  We gassed up in Darby after doing our shopping and headed down the road.
Several of the riders had geared up in their rain gear as we proceeded. The ploy worked as we encountered no more rain.
It was smooth sailing up the valley through Hamilton and Lolo. We headed up towards Lolo pass and eventually sailed over the summit, after taking a quick gas and water break at the cool, old truck stop.
It was a great ride while swooping around the curves and rolling up through the trees along the river. After some great riding, we rolled into Lochsa Lodge for lunch.
We dismounted after finding the only parking left. There were a ton of bikes and ATVs in the parking lot and we hoped there was room in the restaurant.
G-Man's health had deteriorated and he was very fatigued, grey-faced and developed cold-like symptoms. The waitress was extremely helpful and found him a couch to rest on in the next room. He rested while the rest of us had a great lunch, as usual, along with great service.
We headed out after waking up the G-Man. He looked a little better.
After we had cruised along through the sweeping turns along the river, for a while, we observed an older couple next to their upturned car that was mostly in a ditch. We found a turnout and Bomber and Duke went back to check on them. It turned out, they had already received help. When the aforementioned duo, returned we mounted up and headed down the road. We thought.
After a short bit, Grim noticed half the group had disappeared. After finding yet another hot and sunny turnout, Grim headed back to find them. Grim passed Jeff who had also pulled over. Grim next came across Duke who advised that G-Man had removed his chaps and had put them in Bomber's saddlebag. However, G-Man had neglected to take his fob out of his chaps and was unable to start his bike when we all pulled away.
After much motorcycle musical chairs, we finally headed on our way. After some more nice riding, we stopped at the Three Rivers Resort for a break. Water and refreshment was badly needed.
As we rolled up and stopped in the little bit of shade, we observed a person inside the convenience store hurriedly putting up a sign in the window. The sign said that the store was closed until 3:30 and it was barely 3 o'clock. Nice folks....NOT. They won't ever get any business from Grim. We headed on our way.
We continued to ride towards Kooskia where we stopped for water and to gas up Jeff's bike. G-Man's condition was a little scary as he wasn't very lucid and seemed dizzy. We kept our speeds low and smooth the rest of the way into Orofino. Grim was able to avoid the monster pothole that had tried to eat his bike the two previous years.
Upon our arrival, it was found we had again chosen the same weekend as the Pipe Hitters Union MC. The car show was also the next day so the Best Western was pretty crowded. We will be going a week later next year to avoid this congestion.
We checked in and retired to our rooms until dinner. The pool was busy so that was not an option at this time. G-Man went straight to his room and his bed, telling us he wouldn't be at dinner.

At the appointed time, we headed over to the restaurant next door. Our reservation, made the night before, had been lost but our table was just being vacated. It became clear that the restaurant did not have enough help and the help that was working wasn't very effective. The food was pretty good but the service and time spent was pretty bad.
Hopefully, things will be better next year.
We hit the pool after dinner and the water felt great. After enjoying the hot tub and the pool, we all headed off to bed.
The next morning, we awoke and had a good breakfast. We waited until 9 a.m. for the pharmacy to open so we could buy COVID-19 rapid tests. Bomber and Grim went and retrieved them. Bomber and G-Man took the tests in the hotel. Bomber result was negative but G-Man's result, not surprisingly, was positive. Gladly, G-Man felt much better after the night's rest.
We then mounted up and headed towards Kamiah where we took 162 up and over to Grangeville. It was the usual great ride up and out of Kamiah with the scenery turning from pines to great open fields of wheat and such.
We made the usual stop in Grangeville taking on snacks and water. After a bit, we started up the bikes and headed south down Whitebird Grade. What a great time that was. As usual, the temperature rose quickly at the bottom of the grade. We rolled down through Riggins and on through the valley to New Meadows. We stopped in New Meadows for lunch as the Pancake House in McCall has closed for good.
We ate at The Intersection BBQ, Bar and Grill. It was actually a pretty nice place and the food was good. G-Man and Bomber ate outside in the heat but the rest of us were inside. We had ice cream next door and then departed. Jeff told us of a road that would take us around most of the congestion in McCall. Boydstun Road. Grim watched vigilantly for the road but was foiled by a huge camper waiting at the road blocking the road sign perfectly until Grim saw the sign too late. Oh well.
We made it through the madness of McCall and then rode down through Donnelly to Cascade. We stopped at the Chevron station in Cascade and gassed up. We also grabbed some water and such to stay hydrated.
On down through the winding road we went. The traffic was fairly light and we made good time. We rode through Horseshoe Bend and flew up the grade and over into the Treasure Valley.
We said our goodbyes at the Chevron at 55 and Beacon Light before heading to our respective quarantines.
At the time of this writing, Grim is just leaving quarantine after getting a negative PCR test at the doctors, even though I have had minor cold symptoms.
Can't wait for the OMC Fall Run. It should be great! 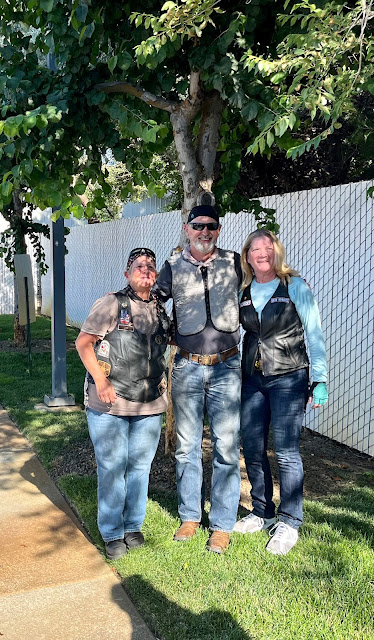 Text and photos by Grim
Posted by GRIM at 8:35 PM